The first of this two-part post focussed on a macro perspective of integrating smart technology into the UK economy. This second part aims to consider micro-level integration at a business level – looking at employment habits and so forth.

This series of blog posts began by looking at historical examples of technology being the catalyst for widespread economic and social change – most notably, the Luddite movement of the 18th and 19th Century.

A key learning from this period was that the Luddites were not enraged at the use of progressive technology, rather it was the manner in which it was used to neutralise their craftsmanship and cut their working hours.

By the time of the Luddite movement, part-mechanised looms were already in use – often the rioters were skilled machine technicians and not from some subsistence artisanal cottage industry many imagine.

The issue was with the intent and the approach rather than the technology per sae.

As a business strategy, this is often only effective over the short term as there will always a market with lower labour costs, as the mills ultimately found when cloth production shifted to the far east.

The revolution in workplace technology occurring right now will eclipse that which the mill owners and Luddites experienced – it will encompass every nook and cranny of the labour market.

So, for longer-term sustainability, the question is not if a business adopts technology but how. A company that leverages technology simply to deskill its workforce is likely to find that it will ultimately be undercut by someone able to automate and deskill even more aggressively.

It is essential then that business is proactive and not passive in its adoption of cutting-edge technology.

As discussed in the previous article, the UK has a chronic issue with productivity.

The article went on to consider macroeconomic strategies that would encourage the country became an innovator and producer of smart technology rather than being a passive consumer of solutions created and owned by businesses from all over the globe except from here at home.

While macro policies clearly have a part to play, ultimately, it’s the responsibility of UK businesses to engage with, understand and to implement smart technology.

Some 20 years ago, Evans and Wurster described the trade-off companies must make between what they termed “richness”, the ability to enhance and tailor customer experience, and reach, the ability to scale. They were looking at in terms of the dot.com economy but the same is as true today as it ever way.

In the context of smart technology, narrowly focuses tactical businesses will use technology to substitute labour, essentially maintaining their position on the richness-reach curve but hopefully with a lower cost base, although it is often debatable how sustainable this is. If other competitors do the same, then maintaining a competitive edge means innovating ever faster in a race to the bottom.

In contrast, smarter strategic businesses will look at how technology can shift the curve. A scale business may seek technology that allows them to improve their customer experience – the richness – and a business with a rich customer relationship may look to technology to increase their reach but in both cases without sacrificing what they already had.

Let’s take a concrete example close to home – network design in telecom companies. Traditionally this is a labour-intensive phase that necessarily relies on highly skilled people, but it is also a function that contains a lot of essentially boring, repetitive work.

Any sensible operator will be looking at ways to speed the design phase up while reducing the cost. A truly smart operator will also have a keen eye on at least maintaining or even improving quality as well though.

One strategy that’s been growing in popularity is leveraging automated tools in offshore design-shops typically in India or some other country with lower labour costs. While there is absolutely no reason Indian network designers are any less capable than British ones, they do have one significant disadvantage – they don’t know the UK landscape, the nuances of UK streetworks rules, road and home construction and so forth.

It is also true that while smart technology is getting smarter, it is still a long way from replacing the skill and judgement of an experienced survey-designer.

This is a good example of a narrow tactical business decision that at best maintains the company’s position on the richness-reach curve. Skilled staff with local knowledge are a fundamental requirement of designing quality telecoms networks.

So, a strategy that focuses only on reducing labour costs is unlikely to succeed in the medium term without constant and probably accelerating innovation – running faster to stand still!

In contrast, a business strategy that considers and values the skills of its workforce will focus technology on those areas that increase the productivity of scarce people while helping to remove the drudge from their jobs – allowing the specialist skills to shine.

For example, creating flexible tools that can create optimally route the cables to reach homes and businesses is a simple job for a computer but somewhat tedious for people. Locating cabinets and access chambers can also be done by a computer but, a human designer would consider many more factors than simply the most cost-effective location:

These are also all questions best answered by someone familiar with the local context. The smarter approach is to combine tools that do as much as they sensibly can, leaving the surveyor-engineer to adjust for the real-world complexity they spent a lifetime increasing learning.

Menial work is processed rapidly by smart machines, releasing the skilled people to demonstrate their value – a win-win for the employees and the employer.

This kind of approach helps the business shift the richness-reach curve outwards – maintaining or improving quality which increasing the ability to scale.

In 2019, 80% of the UK’s economic output came from the services sector – the UK is a people-centred economy. Thinking we can deploy technology simply to replace people is at best naïve and at worst ultimately destined to fail making the UK a low value economy.

By contrast, implementing smart technology intelligently in the workplace will enable UK businesses to thrive into the long term, unleashing the people behind the technology to express their talents.

What’s in it for me?

But how will this better future be encouraged?

Lessons from the past

In all likelihood, as smart technology becomes more common place and the price falls, businesses with a focus on short-term profits may simply seek to replace their staff with machines.

The dot.com bust that Evens and Wurster were writing about was a great example of this 20 years ago, and its likely at least some businesses are destined to repeat the same mistakes.

Ultimately this is about business strategy and the decisions individual business leaders take. Business schools should be – or better, should already have been – teaching this kind of thinking to future generations of senior managers.

Nudge from the top

However, many businesses are highly tactical with short term “strategies”, especially when they’re in survival mode in the middle of a global pandemic. So, Government also has a leadership role in nudging businesses in the right direction.

For example, it could be argued that the current tax system positively encourages the use of substitutional technology over strategies that shift the curve. 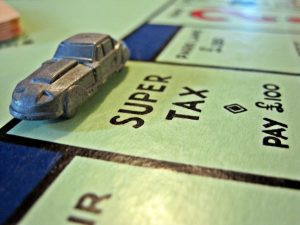 The UK business rates regime charges firms based on the “rateable value” of their brick and mortar premises, along with Byzantine set of rules covering a myriad of exceptions and complexities.

Companies that minimise their physical presence are financially better off than those that employ skilled people, so replacing labour with machines may not only reduce the payroll costs, it also reduces their tax bill.

Very few would argue that a major reform of business rates is not way overdue – it’s is an excessively complex tax that has no bearing on the performance of a business, instead is punishes some sectors at the expense of often foreign online businesses.

A tax system that incentivises efficient economic activity rather than simply owning an office would be more constructive. We already tax profits, so we don’t need additional taxes on success.

Its small businesses and start-up that fuel innovation – let’s make is easier to set up a business and work together by making office space more available. Reversing business rates by taxing empty premises more than occupied ones would encourage landlords to find ingenious ways to get people working and keep their tenants, for example.

What’s in it for them (too good to be true)?

A left-field policy worth considering is the idea of a Universal Basic Income (UBI).

The idea has been debated periodically , supported by figures from Bertrand Russell to Milton Freidman. And various sums have been suggested, such as the $1,000 a month offered by Democrat candidate Andrew Yang, to a negative income tax model suggested by Richard Nixon.

Recently, however, and particularly in the wake of the Covid-19 pandemic, the concept has seen new traction.

One reason it hasn’t transcended from debating circles to statute is its far from simple to implement, throwing up endless practical, economic and moral questions.

However, discussing UBI as a tool to help ease the transition towards a machine intelligent future is worth considering.

Firstly, even if legislators make all the correct decisions to ensure the best possible outcome from widespread smart-technology integration, there is still bound to be a fairly sizeable level of frictional unemployment as a result of labour market change, even it is net positive.

Perhaps creating a targeted UBI to provide support innovative start-ups creating the smart technology (remember, big companies tend not to innovate) or incentives to support retraining for those structurally disadvantaged.

This would provide groups critical to the future economy with an income that is survivable, as well as pumping much needed stimulus into a primarily consumption based economy while helping to ease the pains of transition (hence why the strategy has been discussed more frequently during the current pandemic).

Having a basic income that ensures a roof over your head, food on the table, and medicine in the cabinet will mean that future entrepreneurs are more willing to take a risk – to re-educate, to invest, and to innovate.

As menial work gets replaced, giving people the chance to upskill and reposition themselves in the economy could prove a masterstroke.

There is a huge amount of discussion and research needed, as well as other certain prerequisites such as education reform required, before a UBI could become reality, particularly in the UK, but the benefits, and potential need for it, mean the discussion will not disappear.

In this two-part article discussion has focussed on integrating smart technologies into the economy, in a way that benefits as many stakeholders as possible.

Firstly, we looked at how, on a grander scale, government and big-business can optimise productivity and thus revitalise the lagging UK economy; while in this article we have looked at how business on an individual level can realise more fully the benefits of intelligent machines, while protecting the people that are set to lose most from this shift.

Whether any ideas resembling those contained in this blog series are implemented is a different story, but there is undoubtedly room for positivity and optimism surrounding the potential of new technology.

While many negative futures have been discussed in this series, and many other fearful outcomes are frequently discussed in the media and by prominent industry figures, the essential takeaway is that such dystopias can only occur if we allow them to – the tools and strategies are there and available to us.

The future is in our hands.

Adrian Wooster is a broadband strategist with over 25 year' experience currently focusing on the transition from copper to full fibre networks.